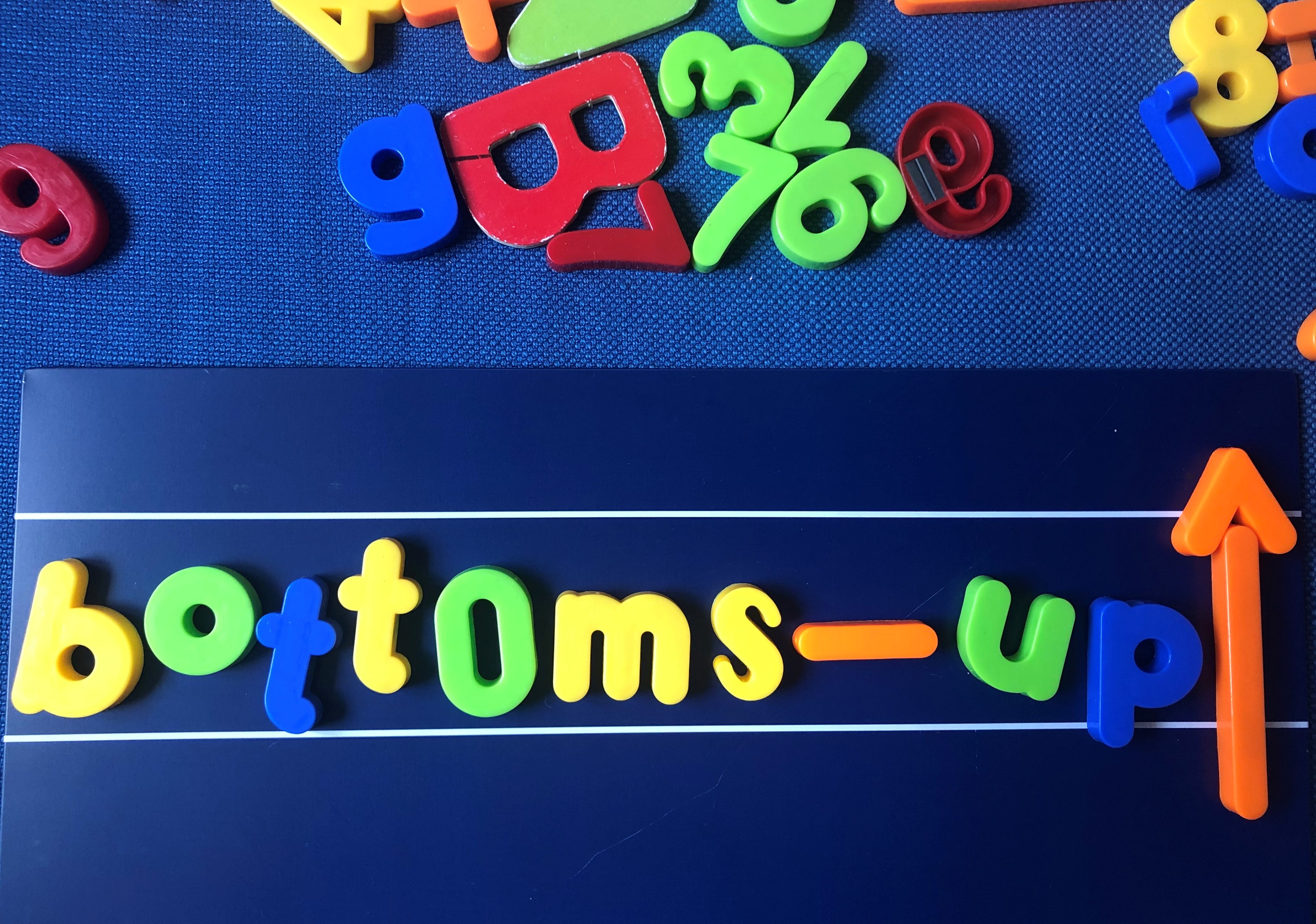 The first deliverable of our Action is out!

It marks the birth of a platform for European forest biodiversity. The platform currently stores more than 2,800 plots. It gathers the efforts of more than 130 researchers from 12 countries in Europe.

What is extraordinary about this platform?

Firstly, it is multi-taxon! It collects information on more than 30 different taxonomic groups, with an average of more than five groups sampled in the same plots simultaneously.

Secondly, it is not only about biodiversity, but it also includes tree-level measurements allowing for a detailed analysis of stand structure, as well as management information.

The amount of forest biodiversity information collected by the platform is impressive and represents the first attempt to include such comprehensive information in a single, harmonized data platform, both in Europe and globally. 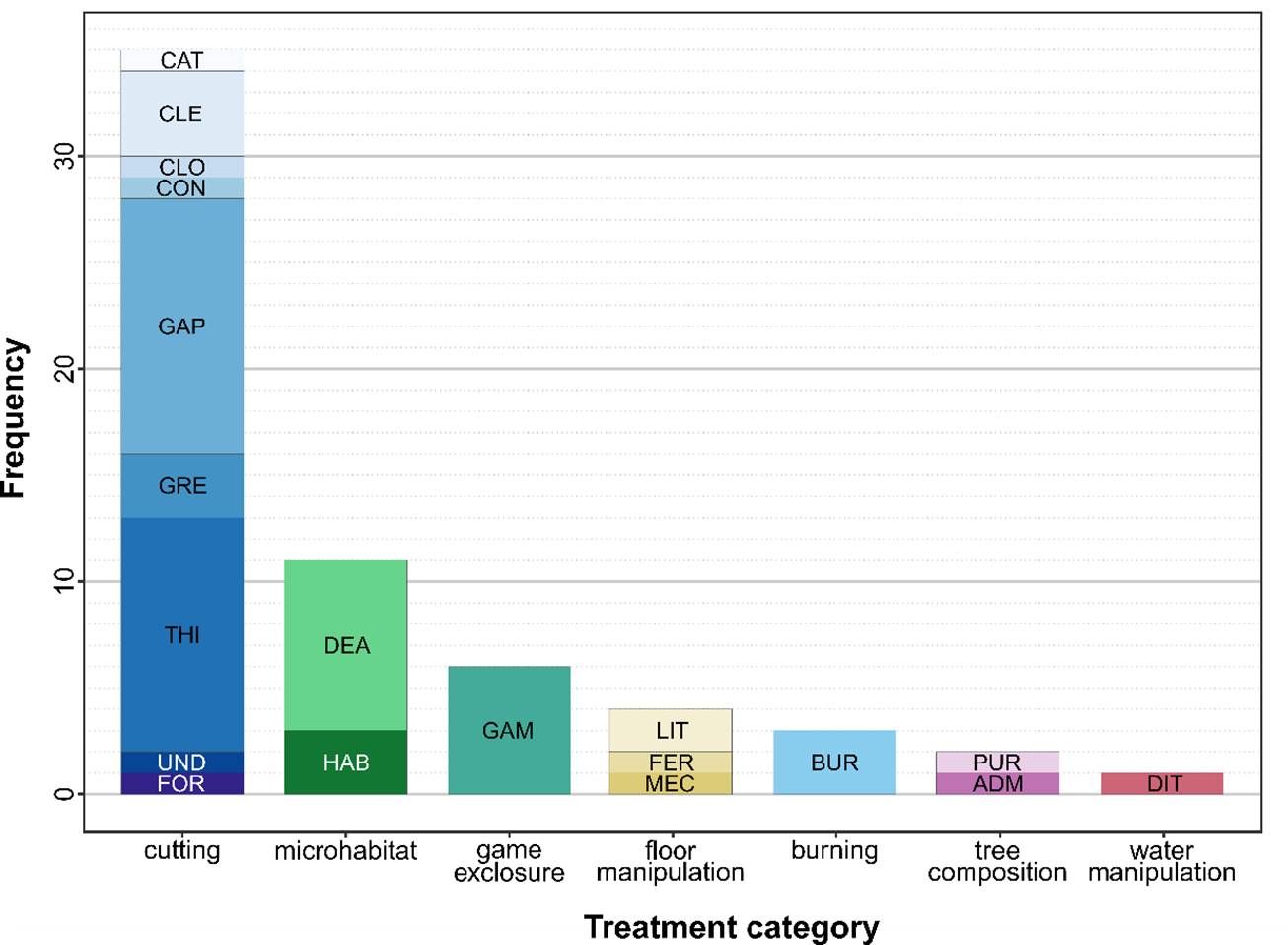 Distribution in Europe of plots/stands included in the platform classified by dataset ID. Green areas are those covered by forests by more than 40% according to European Forest Institute (EFI) Forest Map of Europe 2011: Kempeneers et al., (2011); Päivinen et al., (2011); Schuck et al., (2002).

The platform includes more than 300,000 observations. Among these 81% have been nomenclature-checked at the species level, amounting to 5,961 unique species from 615 families, 159 orders and 37 classes. The classes more widely represented in this subset include several families of plants, bryophytes and insects which are represented in more than 50 % of the plots. 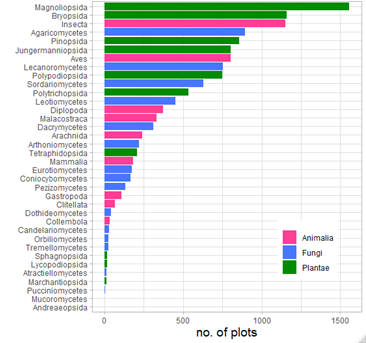 Frequency distribution of different taxonomic classes including only records where species taxonomies have been checked (N = 266,380).

Does such a huge biological diversity represent European forest biodiversity?

No, there is much more we will need to sample and study to achieve a whole representation.

The platform includes information on 12 out of 14 forest categories, however it seems forest ecologists are very fond of beech forests (maybe a bit too much), while neglecting other forest categories: deciduous oak forests, Mediterranean forests. Also, it seems European forest scientists are not addressing specifically what remains of European floodplain forests. 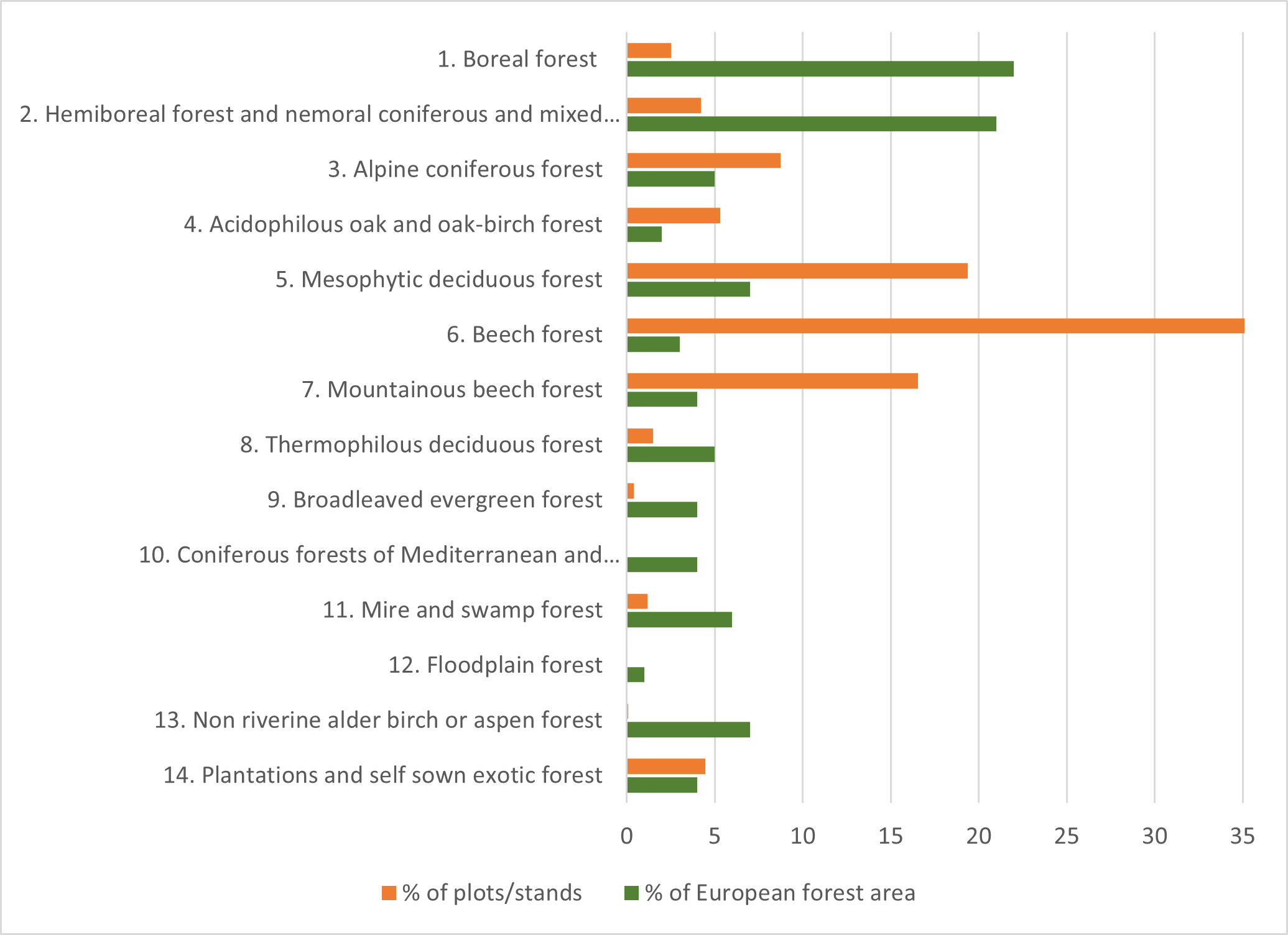 Share of the total number of plots (in orange), and of forest area in EU-28 (in green) based on (Barbati, Marchetti, Chirici, & Corona, 2014) across different Forest Categories (sensu EEA, 2006).

Among silvicultural systems, selection systems, clearcuts and unmanaged forests were sampled in a large number of plots, while coppices were strongly overlooked. In general, the coverage of our platform shows the tendency to perform multi-taxon biodiversity studies in those forests that are perceived as less intensively managed, such as those under selection or shelterwood management regimes. Conversely, clearcuts are represented mainly in experimental studies that stem from the perception of clearcutting as threatening for forest biodiversity. Unmanaged forests have been often sampled as a relevant reference in comparison to managed forests in general, especially versus those forests that are managed through strategies that are generally perceived as sustainable. 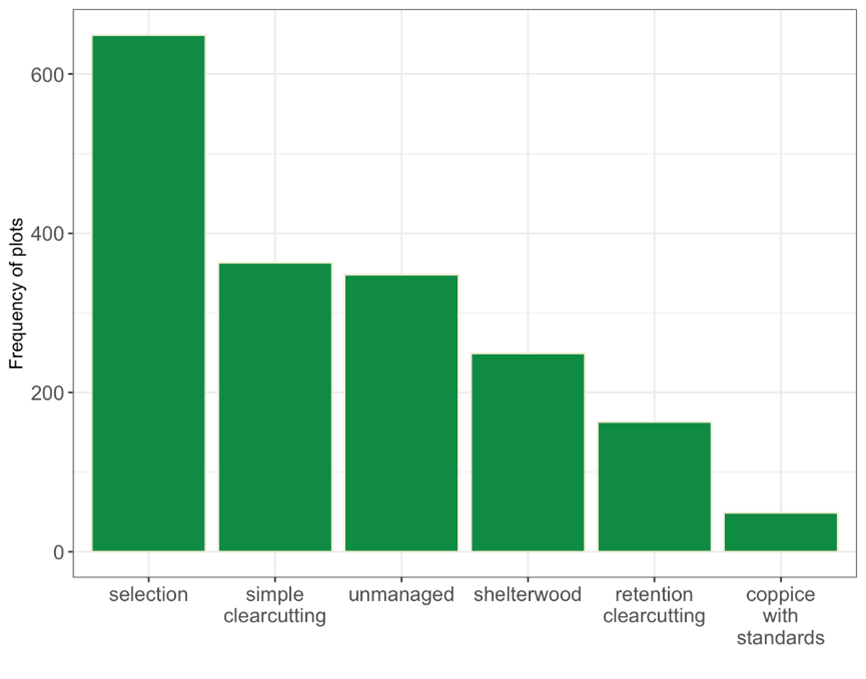 Distribution of the platform plots across silvicultural systems.

Where does the platform come from?

I was involved in two multi-taxon projects during my career as a forest ecologist, and really enjoyed the context of mutual learning that characterizes them. Having the possibility of performing field campaigns together with taxonomists of different fields teaches you a different perspective towards forest ecosystems, it is an enriching and precious experience.

The great effort that is necessary to sample multiple taxonomic groups often limits the extent of such projects to few stands, and this makes multi-taxon studies not always rewarding in terms of publications, and often not able to result in a broad-scale picture.

Since 2010, when I was a post-doc, I took advantage all the occasions I had during conferences and workshops to meet researchers with similar multi-taxon experience across Europe, and tried to share our data and experiences on multi-taxon forest biodiversity.

Our job is not over!

Other datasets are being processed to enter this first version of the platform.  Checking of taxonomic nomenclature still needs to be finalized, and plot-level metadata needs a certain degree of integration.

We are not only working head-down on these compilation tasks. Now that the first version of the platform is almost ready, we started brainstorming on how the platform can benefit European forest science and governance.

Certainly, multi-taxonomic information allows for fine-scale links between silvicultural systems, structural attributes, and multiple species groups simultaneously, as well as for investigating a wide range of cross-taxon relations within and across forest categories and silvicultural systems.

In the mid-term, we would like to use the platform as a pilot to design a monitoring network for European forest biodiversity to be discussed with the European Environmental Agency, which is taking part to the Action.

The platform represents the starting point for several research and monitoring activities related to forest biodiversity conservation. Through these common steps, we will be able to provide the information for a more evidence-based discussion on forest biodiversity and forest management sustainability in Europe.

... to Giovanni Trentanovi, Francesco Chianucci, Thomas Campagnaro, Tommaso Sitzia for participating in the organization of the workflow that led to this deliverable, to Francesco Chianucci and Sebastian Kepfer Rojas for the enormous work of checking and merging data, to all the mentioned colleagues plus Yoan Paillet, Peter Odor and Kris Vandekerkhove for suggestions on the deliverable and for continuous support.

Warm thanks to all 131 data custodians and contributors within the platform for sharing their data and for their collaborative attitude.